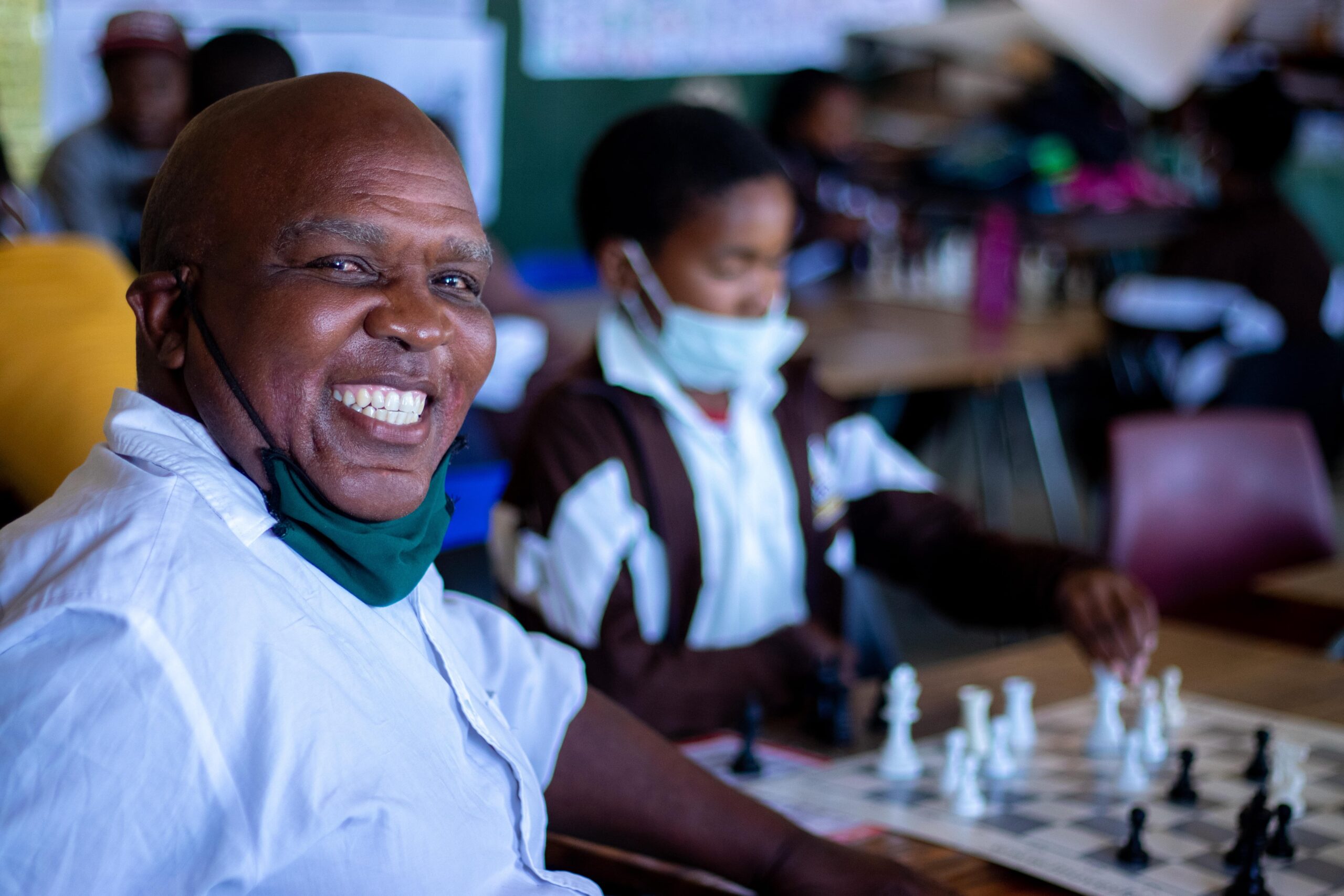 Masters in the Making at 2 Knights Chess Academy

On Thursday, 20 January 2022, is International Day of Acceptance which focuses on the ethos of love, acceptance, equality, respect and understanding for people of all abilities. The day of observance, created in memory of the founder of disability-owned 3E Love Annie Hopkins, inspires and encourages following your dreams and being the best you can be, regardless of physical factors.

Today, Ikamva Labantu acknowledges and supports a great community champion, Miveliso Sidwell Mayekiso, the impetus behind 2 Knights Chess Academy. To advance the Academy he’s often used his own disability grant to help pay the children’s registration fees and transport costs for important rated tournaments, helping many chess masters in the making to follow their dreams. Since its launch in 2018, the club has gone from strength to strength, participating in tournaments, and more importantly, inspiring young minds.

Located near his home at Impendulo Primary School in Khayelitsha, the majority of players are from the school, where Sidwell has established a competitive team with the assistance of his wife Zingiswa.

Club members ages range from six-year-olds in Grade R, to the oldest girl at 19. Two young players, Thimna Angel Choli and Solulele Diniso, were selected to represent South Africa at the prestigious World Schools Individual Chess Championship in Panama City in 2019, but didn’t get to fulfil their dream due Covid-19 restrictions. Some of the Academy’s other top performers have been playing for Western Province, with the highest rating being that of Bongolethu Ncethelo, whose rating sits at an impressive 1500.

The next goal the wheelchair-bound coach has his sights set on is participating in the South African Junior Chess Championships. This entails keeping the smart moves flowing with focused game playing every week. “They want to learn and it’s so easy for me to teach them.  We meet every day from Monday to Thursday, and on Saturdays we play online games at my house. I have a router and they enjoy themselves there,” he says.

When asked to rate his own skill level, the modest club founder selects ‘teacher’. “I just play the role I can in society. I teach them about grandmasters and share good chess books, and they become better players. My love for the kids pushes me, and I always pray to God that nothing bad happens to them.”

In 2018 the club housed 150 children, but now it averages around 60. “The Grade 12s are struggling to come, but I try and find them, as I worry about them. Hopefully, we are picking up and moving forward again,” he says. “We’ve got different groups organized according to skill. The most advanced child has a rating of 1.5, and there’s one guy in the senior team with a 1.4 rating. They are better than me and I can’t even compete with them anymore,” he laughs.

In his view, the most important skills needed for great chess playing are good concentration and focus. Does the game encourage learning? “Yes definitely, the teachers say that those who play chess do better at mathematics and physics. It encourages discipline and gives one a chance to become a smarter person.”

Sport Community Builder of the Year

The Academy is supported by Ikamva Labantu as part of its Ikamva Venture initiatives. Through micro-business and social upliftment projects, the NPO has proactively been raising the quality of life in Cape Town’s townships for many years, and the Ikamva Ventures programme actively supports community change-makers with the intended outcome being to build community resilience and strengthening the social fabric.

Teacher Sidwell Mayekiso more than fits the bill of someone who galvanises those around him to build a better future. “I am so lucky I met the wonderful individuals from Ikamva Labantu – Ilana Melzer and Helen Lieberman, who were so excited with my program they took me and my team to the SA Top Schools Team Chess Competition in Johannesburg. I can cry when I think about that,” he says.

The 2 Knights club also received a donation of five digital clocks and 10 chess boards from a supporter from Durban. “There was a Mrs. Fourie who heard about me in 2019 after I was selected as finalist Sport Community Builder of the Year by Chess Western Province. They select people who do well in their communities and I’m very proud of myself,” he adds.

His vision for the future: “To have my own school so kids can go there anytime and have fun. I also want to have a holiday programme, else what will they do. Ultimately my dream is to see them become a better person and do well one day.”

Sidwell quotes Bobby Fischer and former world chess champion Garry Kasparov as his own inspirations. His advice to beginners bitten by the chess bug: “Don’t rush, but play in a very defensive way. One needs to develop your pieces first, then do a calculation in the middle game. Play strategically and in a logical way, then you will have an edge and master your game.”

Netflix series, The Queen’s Gambit, recently boosted the popularity of the game, making flourishing ventures such as 2 Knights Chess Academy the perfect seedbed to transform lives and fortify the future of South African chess.