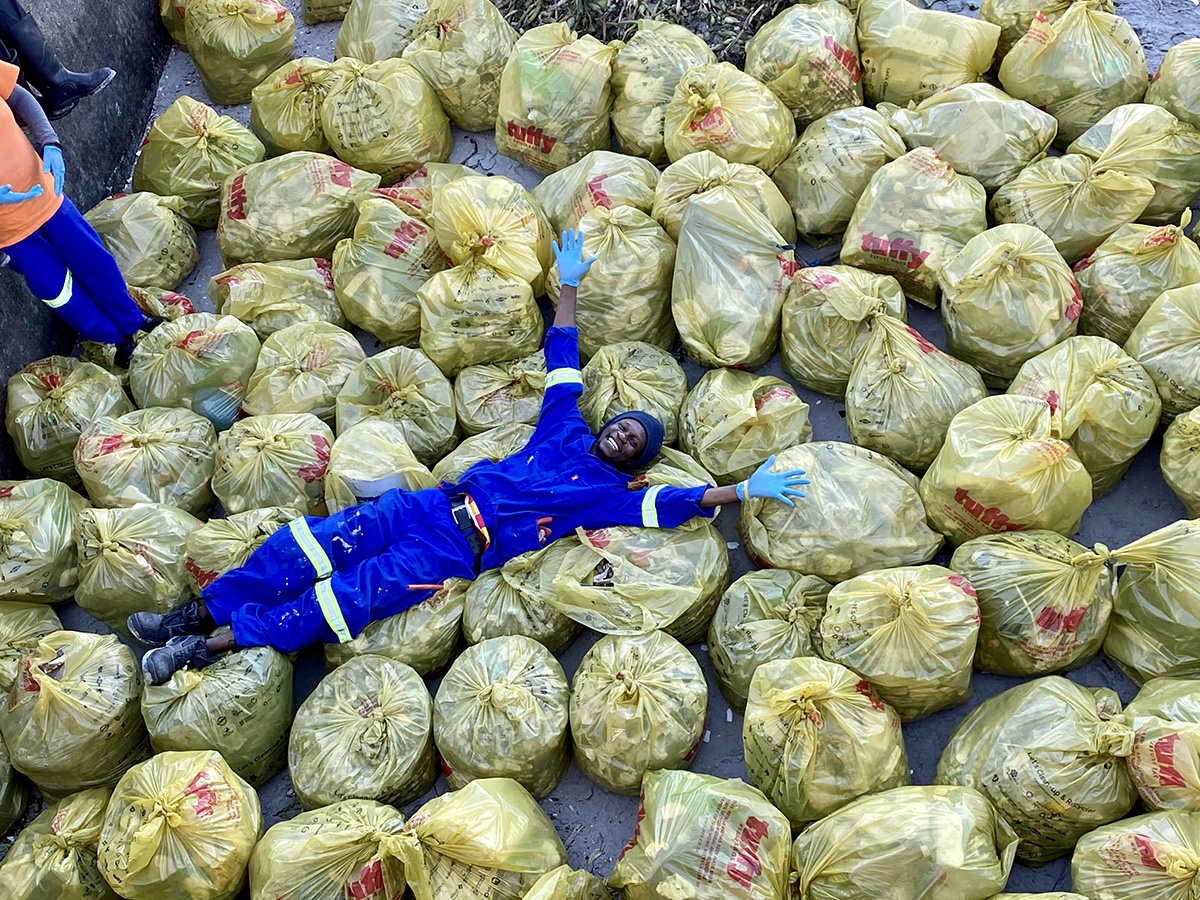 Solving the problem of plastic pollution entails a concerted global effort, but every endeavour both big and small goes a long way to minimize this scourge. With this in mind, one Cape Town-based venture working hard to remove single-use plastics before they reach the ocean is Izame Zabantu Nature Helpers.

A social enterprise supported by local non-profit organisation Ikamva Labantu, this blossoming initiative is motivated not only to prevent ocean waste, but also to put food on the table and money in the pocket for participants in the project.

Since its inception in February 2021, Izame Zabantu has grown organically from a four-person team to seven people, and from one sponsor to dozens of donors. Led by Team Leader Nicholas Sundiro, they’ve been toiling to clear plastic from the Black River mouth and beach at Paarden Eiland.

This undertaking has already seen them remove over 6000 bags of plastic since February 2021, whilst creating employment for the workers who lost their jobs during the Covid-19 pandemic.

As with many other river mouths in South Africa, the volume of debris that flows daily into the Atlantic Ocean at the Paarden Eiland juncture is alarming. The plastic waste never stops, despite their best efforts. After storms and on gentle days, shreds of broken up polystyrene take time to collect, plus the removal work is dangerous. Team members navigate their way through tides, along the concrete boulders that line the shore in rain, wind and heat.

They pick up everything from rubber tyres to suitcases, bottles, flipflops, diapers, lighters, straws, condoms, ‘disposable’ cutlery, clothing, chip packets, kid’s toys, fishing nets and more. The bags fill up quickly, mostly with waste that is too dirty to recycle. They are heavy to carry and the stench is mostly foul.

The group has focused on just one location on the corner of Nautilus and President Kruger Streets in Paarden Eiland, but their long-term goal is to send teams to other river mouths. This will not only provide an income to thousands of people in need, but also give a sense of purpose for safeguarding the planet.

Izame Zabantu founder Natanya Mulholland’s comments: “I am humbled and encouraged each week by the dedication of the Izame team, who even through taxi strikes, walked in the rain from Philippi to Paarden Eiland to collect plastic – knowing that if they were not there, that load would be washed out to sea.”

“The initiative has grown organically, and nine months later, has fundamentally shifted my outlook on life. Building a community of team members, donors and supporters has been very inspiring. The positive impact that has been made by the initial clean-up of a few bags of plastic litter on a beach is astounding, and I no longer buy things in plastic where possible,” she says.

Probe Corporation SA is one ardent sponsor of this coastal clean-up project, where skills development and environmental sustainability are paramount. “We believe in supporting people who take action to make a difference. Izame Zabantu has great potential to expand countrywide and we hope partners will join us in supporting this vital initiative so that it can replicate and grow. We are impressed with how this young organisation is striving to build a stronger South Africa through collaboration, action and kindness,” adds CEO Rick Rovelli.

In an attempt to curb ongoing pollution, the City of Cape Town has considered putting nets on storm water outfalls at river outlets and canals to trap solid waste from polluting our water bodies. They have piloted these litter nets in the Black River. But according to Abdulla Parker of the CoCT’s Water and Sanitation, Water and Waste Services, challenges of theft and vandalism still need to be overcome.

Until then, the team will continue their valuable work for the benefit of all.

In Ikamva Labantu’s almost 60 years of working in the townships it has consistently sought out partners who galvanise their communities to build a better future, thereby contributing towards financial resilience.

Nicholas Sundiro sums up: “Izame Zabantu has given us new hope. The team are all now earning money for food and rent, and the work gives us all a positive feeling because we know that we are helping nature. It is sad to see that the plastic never stops coming down the river, but picking it up and making sure less enters the ocean gives us a feeling of doing important work.”