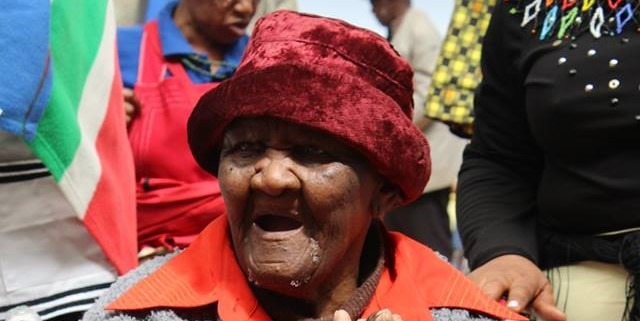 Donate to support seniors in need.

There are some common patterns of ageing that are universal. Many people over 40 begin to need reading glasses, many people over 65 find it harder to hear clearly in noisy environments, and strokes, dementia and heart disease become more prevalent in those over 70.

But Ethel* is an exception to the rule. At 104 years old, she is in good health, has never needed glasses and has almost perfect hearing. But her life has not been smooth sailing.

Ethel was born in the Eastern Cape in 1913. She enjoyed her childhood and believes those early years made her happy and gave her strength for her future. When she was 18 years old, Ethel’s father arranged for her to marry a local priest. Her husband’s job led them to live in many places including King Williams Town and Port Elizabeth.

In 1939, they moved to Elsie’s River and lived there until 1960 when their settlement was destroyed by the Apartheid police and they were relocated to Gugulethu. Finally, in 1990, they moved to a house in Khayelitsha.

Throughout these years, Ethel raised ten children while working as a domestic worker and a factory worker. Sadly, just three of her children are still alive today. One of her sons, now an elderly man himself, has been rendered totally blind through diabetes. He lives close to his mother and they keep each other company. Ethel also has 22 grandchildren, 12 great-grandchildren and 8 great-great-grandchildren.
When asked what her secret is to reaching 104 years old, her daughter and granddaughter both chant in unison: “No drinking, no smoking and no liking men!” They laugh. It appears to be a family mantra!

*Not her real name

—
Ethel lives in Khayelitsha, where she is provided with home-based care from Ikamva Labantu’s field workers, or “Umelwanes”. Our Umelwane programme provides support and companionship to senior citizens who are unable to attend our day clubs due to frailty or poor health. Ethel is one of over 1,000 seniors who has received home-based care through Ikamva Labantu.
By donating R150 a month, you can provide an elderly citizen like Ethel with basic needs, support and companionship.