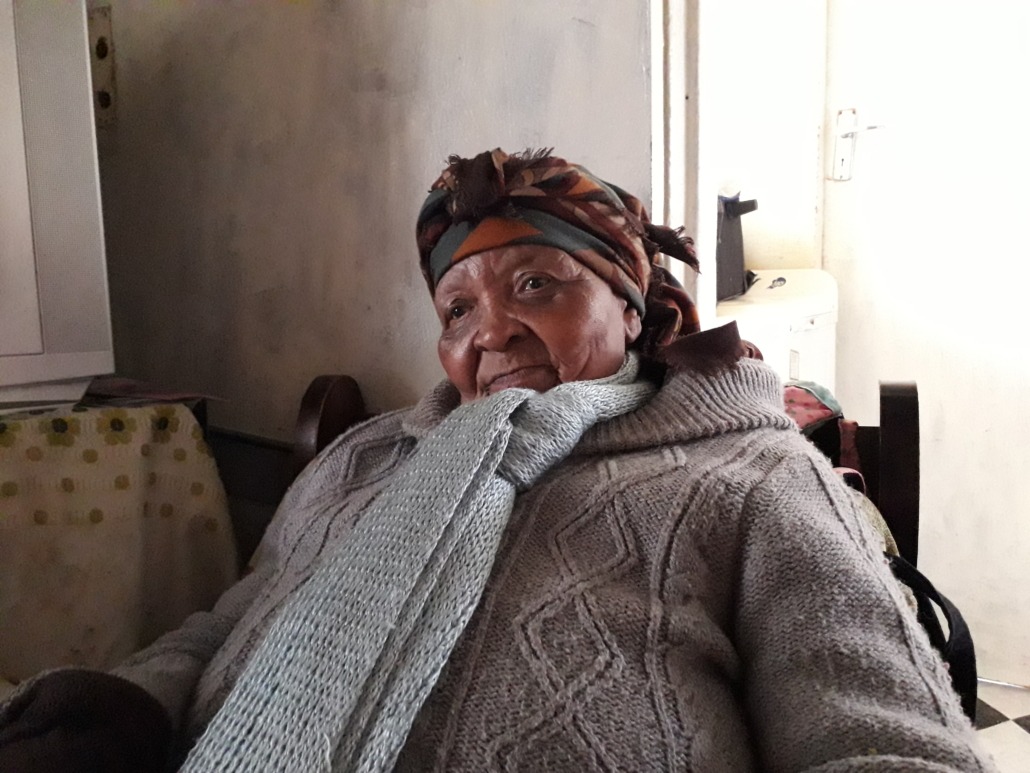 Donate to support seniors in need.

In 1957, Mandisa’s husband passed away and she was left alone to care for their four children in Lady Frere, Eastern Cape. There were very few jobs in her village and Mandisa had no option but to try and find work in Cape Town so that she could support her family. She knew that it would be almost impossible to get a pass that would allow her to live and work in Cape Town, and that if the police stopped her without a pass, they would send her back to the Eastern Cape. “I was so frightened but I needed to get a job so that I could feed my children,” Mandisa says.

Working without a pass was difficult, too. “You had to walk from door to door. Some people were sympathetic, they were the good ones, and they would listen to your story and give you a job without a pass. But they were also scared of the police. When they employed you, they told you that you mustn’t answer the door in case the police come.”

One day, Mandisa was walking back from work when a big yellow police van stopped her. The police arrested her because she did not have a pass. “I was the first person to be picked up, so they drove around for a long time looking for other people to arrest. When the police van was full, they took us all to the police station.” That night, Mandisa and the other prisoners had to sleep sitting up. She was not able to contact her family and they did not know what had happened to her. In the morning, the prisoners were taken to court. “It was very full in the court. But everyone was there for the same crime: not having the right pass. I was given a fine and told that I had three days to leave the Western Cape and go back to my village.”

In court, Mandisa met a woman who reassured her that she would be okay and encouraged her to stay in Cape Town. “She told me to keep running and hiding and doing whatever I needed to do for my children. If I lose a job, then I must find another one. If I get arrested, then I must hide again. This woman motivated me to keep fighting for my family. I threw away the letter that said that I had to return to the Eastern Cape and I went back to work.”

But for many years, Mandisa struggled to find work. She had been employed by a French family but when they found out that she didn’t have a pass, they asked her to leave. “They said that I must go because otherwise, their family would get into trouble. They said: ‘We need to save ourselves so you have to go.’ It was very painful.”

In 1977, 20 years after her husband died, Mandisa found a job at Nazareth House. She had heard that there may be a seamstress job there and she went to see them. “They gave me a basket of unfinished products and asked me to complete them. At the end of the day, they came to see my work and they gave me the job. This was the first time in my life that I felt rested. I felt that there was a light at the end of the tunnel. After 20 years of hardship, the people at Nazareth House helped me to get my pass. I was free. I worked with them until 1999.”

Mandisa lives in Khayelitsha, where she is provided with home-based care from Ikamva Labantu’s field workers, or “Umelwanes”. Our Umelwane programme provides support and companionship to senior citizens who are unable to attend our day clubs due to frailty or poor health. Mandisa is one of over 1,000 seniors who has received home-based care through Ikamva Labantu.

By donating R150 a month, you can provide an elderly citizen like Mandisa with basic needs, support and companionship.