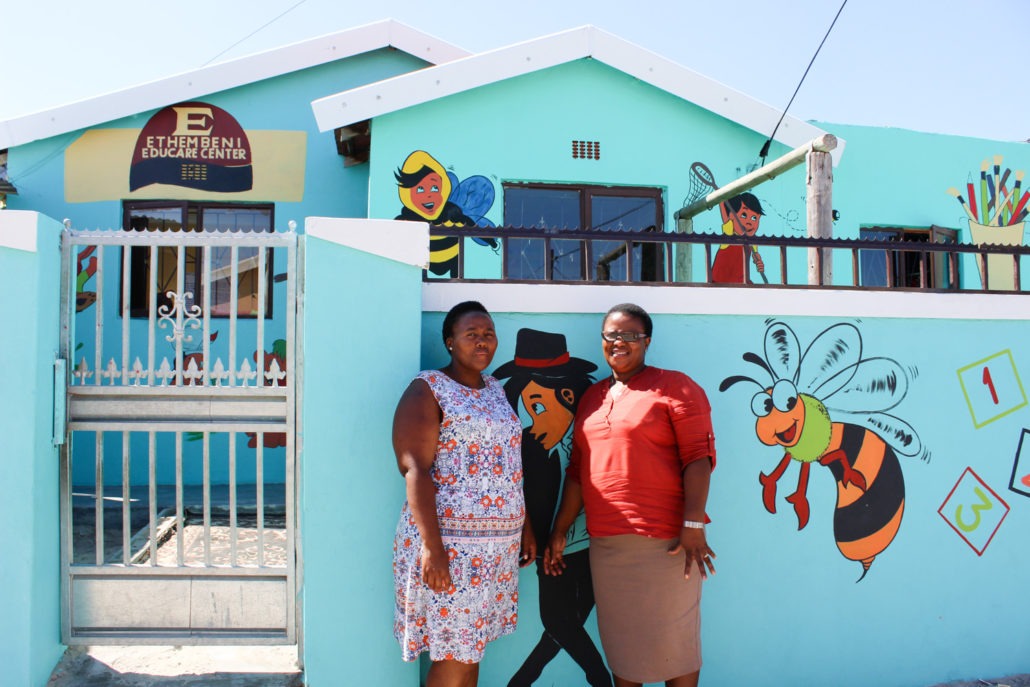 The Journey to becoming Principal

Each afternoon, as the school day ended in a rural village in the Eastern Cape, 15-year-old Lindiwe Dlakala would settle down with some homework. It was 1989 and against the backdrop of a country in the grips of Apartheid, she was determined to work towards a more hopeful future. Armed with the knowledge gained during school hours, Lindiwe would tackle homework late into the evening; but it wasn’t just her own homework that she was working on.

When the last class of the day ended, Lindiwe transitioned from pupil to teacher. “I used to teach other children after school, because there was no educated person in their home. I would visit the homes of grandmothers in my village and help their grandchildren with their homework.”

At just 15 years old, Lindiwe was already setting the groundwork for what would become a lifelong career.

Today, the 44-year-old is Principal at her own pre-school in Khayelitsha. Founded in 2013, Ethembeni Educare cares for 67 children, aged 0-5, from the surrounding area.

The pink and yellow walls of Ethembeni are peppered with educational posters, the letters of the alphabet and numbers up to 30. In the younger classes, these are replaced with fruit cut-outs and giant paintings of sea creatures and insects.

Lindiwe’s pre-school has been registered for one year now, though the process to reach registration status took almost twice as long.

In South Africa, a pre-school needs to be registered with the Department of Social Development in order to access an early learning subsidy, a form of government funding. But this can be a long process with many delays and challenges.

According to provincial government officials, there are about 2,000 unregistered pre-schools in the Western Cape.

To meet the requirements for registration, Ikamva Labantu assisted Lindiwe in upgrading her pre-school. “I had to change all the doors and floors. We needed to have one toilet per 20 children, so I changed the bathrooms too.”

“I spent a lot of money upgrading the pre-school. I used money from school fees and from my own savings and slowly, with the help of my husband, we fixed up the pre-school. My husband helped me a lot because he knows that this is my dream,” Lindiwe says.

Lindiwe has four practitioners who make up her staff. The practitioner for babies aged 0-18 months is pictured above in her classroom.

For an informal pre-school with no external funding, an exercise like this is often unaffordable, making registration a distant reality for thousands of pre-schools across the country.

But together with Fezeka Sibidla, a community-based worker from Ikamva Labantu, Lindiwe overcame the first major obstacle to registration in 2015, when she received the stamp of approval for zoning. “This is the first bridge to cross” says Fezeka, who specialises in consulting pre-school principals on the registration process. “Once you have zoning and a brick structure, it’s easy to get the other clearances.”

But even with a registration certificate in hand, Lindiwe still has to apply to renew her funding this March. And that funding is as important now as it was pre-registration.

Lindiwe charges just R200 ($17) a month for school fees, which she uses to pay salaries for her four practitioners. “Sometimes I don’t get a salary of my own because I want to satisfy the staff.”

Fezeka echoes this statement, saying: “We know that she needs to keep her staff – whatever you do, you make sure that your staff are happy. No staff, no pre-school!”

The 5-6 years class, pictured with their practitioner and Lindiwe.

“I also need to give the children food, toys and stationery,” Lindiwe continues. “The DSD funding does help with salaries, food and maintenance –so there is some change, but not enough. Our staff still only receive R1,500 ($126) per month.”

Fundraising attempts within the community have been unsuccessful, with some parents struggling to even afford the school fees. “I will never chase the child away because of this,” says Lindiwe. “I need to take care of them because I need our country to have educated children.”

When she opened the doors to Ethembeni in 2014, Lindiwe looked after 20 children. Today, at almost 70 children, the pre-school is still growing. “The parents cry to us when we tell them that the pre-school is full. We need a bigger structure now; I will keep growing this pre-school until I die.”

True to her word, Lindiwe plans to apply for Grade R certification this year from the Department of Education; this would allow her to open a Grade R class at Ethembeni. “We give the children a good education. We even do graduations for the older children. Last year we graduated 26 children; in 2014 it was just 14.”

Lindiwe’s office is cramped but perfectly organised. The noise of 70 children doesn’t allow for much quiet space to work, but Lindiwe hopes to soon convert her office into another classroom and move her desk to a quieter part of the building.

Although this is Lindiwe’s pre-school, Fezeka has walked the road to registration with her and is clearly proud of the outcome. “The place has been transformed. It was not colourful outside before, it was just brick walls. You can see that Lindiwe is using the funding in a good way. It is bright and colourful now and everyone can see that this a pre-school,” she says.

And the changes aren’t only physical; testament to Lindiwe’s dedication, the children’s learning has improved too. “We have a relationship with the local schools,” says Lindiwe. “The teachers come to me and tell me that our children are doing really well – they are writing properly and are at the right stage of development.”

This is, of course, the ultimate goal for any pre-school; to get children ready for the start of their schooling career.

More than 20 years since Lindiwe first started helping other children with their homework, she is still hard at work, striving towards a better future for South Africa.

Lindiwe took part in the Ikamva Labantu Principals Training programme, learning about leadership and management. Two of her staff members have done the Practitioners Training programme where they learnt practical skills for the classroom and how to engage with children and parents.

Fezeka is a community-based worker who works for the Ikamva Labantu Registration Help Desk; helping principals to navigate the registration process for pre-schools. We have reached 556 community pre-schools through this initiative.