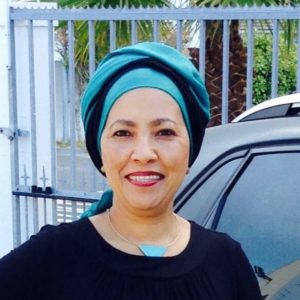 We are thrilled to welcome Ishrene Davids back to the Ikamva Labantu family, as she joins us as the new General Manager.

Ishrene has more than 30 years’ experience in the social development sector.

She grew up in a time when careers were limited and ambition was a swear word. As a young child, living in a two-bedroom house that groaned under the weight of 12 boisterous, uncontrollable siblings, she discovered the solitude that books offered. She understood the power of the English language and started to read dictionaries, voraciously. After completing matric she registered at the University of the Western Cape to study Social Work.

Ishrene has worked in three large and well-respected NGOs, since completing a three-year stint as a probation officer at the Department of Social Development in 1988. Her work as a mental health professional at Cape Mental Health Society laid the foundation for a committed career of advancing social justice and the care and support of individuals and communities. She worked there for 10 years.

She joined Ikamva Labantu in 2000 as a field manager when the organisation was undergoing one of its first big transformations. Her first big (and daunting) task was to work alongside external consultant, Fedde Renkema, managing the communication and feed back to staff. Later she helped to develop the Human Resource Department and was the HR manager for a number of years. She went on to become the Chief Operations Officer and later, the Director. It was a time of tremendous growth for her. She left Ikamva Labantu in 2011 to complete her honours in Social Policy and Management at the University of Cape Town.

During 2012 she was approached by the Community Chest to assist in the grant-making department. When the new CEO started in 2013, Ishrene led the transformation process and became the lead communications person for the staff. Her various roles included HR, strategy, compliance, grant-making and policy. When she left the Community Chest she was interim Chief Operations Officer.

Ishrene enjoys reading, writing, poetry, and travelling. She has two adult children who are both still living at home. She has run out of ways to get rid of them.

Ishrene says that “Returning to Ikamva Labantu is like coming home.”

We are thrilled to have Ishrene back with us and look forward to further growth and development of the organisation, with Ishrene at the helm.