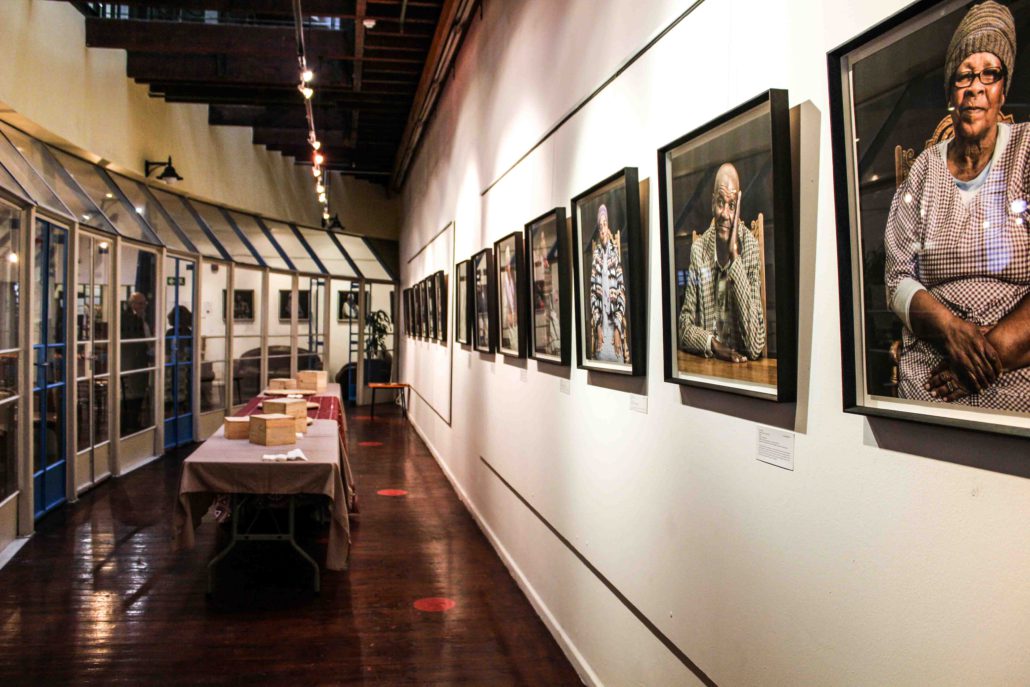 Sixty + Counts event puts treatment of the elderly in the spotlight

On Thursday, 12 October, in partnership with Embassy of France in South Africa, we hosted a panel discussion and silent auction at the Alliance Française du Cap.

The Sixty + Counts exhibition is on display for the month of October in celebration of International Day of Older Persons, marked annually on 1 October.

“It is assumed that the elderly in communities are the most respected but they are often the forgotten, neglected and even abused,” says Lulama Sigasana, Head of our Seniors Programme.

The panel discussion focussed on the challenging realities for the elderly in South Africa, whilst also highlighting the work that is being done and what can still be done through collaboration between government and non-governmental organisations.

Says Weir: “We have one of the best constitutions in the world, we have the Older Person’s Act, but without the resources to implement the basic rights of the elderly, these are not worth the paper they are written on.”

Weir continued to say that through engagement with provincial and local government on housing, it became clear that the social grant receiving pensioner was not a priority. He says: “we have to start understanding that there is not necessarily help available from government, we need to mobilise society to protect and celebrate the ‘living libraries’ in our communities and our nation.”

Owen Kleinhans – who is responsible for all outreach activities at the Western Cape Regional Office at the Department of Justice (relating to Vulnerable Groups) made a public contract on the evening stating,  “I am a public servant, contact me to protect the rights of the seniors and to let me serve you. There is a widespread lack of knowledge among seniors of their rights to protect themselves against domestic violence, loan sharks, economic and emotional abuse”. He reiterated the importance of a collective voice from seniors and a better understanding of their rights.

According to Dr Leon Geffen, research is being undertaken to understand older persons’ perception of the healthcare services in South Africa with the intention of building a resilient healthcare service that responds to the needs of a rapidly ageing population. The current research has shown that older people attending healthcare clinics do not feel that their needs are currently being met.

The Moderator for the evening, Professor Brian Williams – who works in the field of mediation, peace-building and labour law, concluded the panel discussion by saying “we’re left with a powerful and profound question of humanity when it comes to our seniors, and it’s up to us as a collective, to answer it and to mobilise and support the rights of our seniors to human dignity”.

We raised an amazing R70,000 through the auction of the exhibition portaits, which will go straight towards our Seniors Programme – helping to provide support and resources to vulnerable seniors.

“This amount will ensure that at least 185 seniors will be able to make vital appointments to specialised healthcare or grant-making services and contribute to the R9 million annual budget,” says Jovana Djeri, Head of Fundraising at Ikamva Labantu.

“France is committed, with local partners, to the social transformation of South Africa through projects such as this one. On the occasion of the International Day of Older Persons, we wanted to highlight and promote the excellent work done by Ikamva Labantu and put the spotlight on the rights of older people in South African society,” says Ambassador of France, Christophe Farnaud.

“We are delighted by the conversations that took place and the new networks that were established. That makes us especially hopeful that seniors are being heard,” says Djeri.

Thank you so much to all who joined us, supported the event and furthered the dialogue around the wellbeing of South Africa’s elderly.

Any of the photographs that were not sold through the silent auction are now on sale to the general public and the exhibition will be open to the public until the 29th of October.

For more information on Sixty + Counts or the seniors programme, please contact ronell@ikamva.co.za.